Kayaking on the Ardeche

Kayaking in Ardeche is BIG business. There are loads of outfits offering experiences and thousands of boats. Transits pulling boat trailers piled high with canoes are a common sight..

We arrived at the start point, paid our money and collected our waterproof ‘tub’. Cliff and Ann had their own bouyancy aids with them and once we were sure they were OK to use them, we put on our water shoes and waited. The safety briefing was excellent. It was in French but fortunately Cliff had been given the brief earlier in English, when the guy had twigged we weren’t French! Ann’s French doesn’t run to the full complement of water safety vocabulary either!

We were driven to the start of the descent at a little place on the river that we had passed a few times during our stay. We launched ourselves successfully then powered away to put some distance between ourselves and less experienced paddlers. Once clear we relaxed our pace to take a few photos and enjoy the sheer beauty and tranquility of the river. It was as well we did, once we got close to the Pont D’Arc itself it was canoe chaos central!

On the river are certain points there are ‘slides’ to get safely down the weirs. We had been instructed on the procedure and where they were. We (when I see we, I mean Ann) approached the first one with caution, checked below for other paddlers, before raising our paddles above our heads and launching ourselves. It was amazing. Thereafter Ann couldn’t wait to go down and enjoyed every one!! There were a few minor Rapids to negotiate too. Thanks to the 2 Star kayak and canoe course she had done, Ann felt much more confident than her previous run down the river and enjoyed every moment.

Towards the end of the descent, we stopped off at the Pont D’Arc for sausage and chips. We’d forgotten that the 13.30 rendezvous time meant we’d miss lunch and we forgot to get anything! It was a bit of a scramble, the whole world and his wife seemed to have come down to the river Saturday afternoon. As it involved speaking French, Ann went off to get the food whilst Cliff guarded the boat. There was all sorts of fun and frolics going on; people jumping in from high rocks, families swimming and messing about in small inflatables and groups of lads coming down in convoy, swigging pastis from large water bottles!

After refreshment it was back in the boat to complete the final short paddle to the finish. It came up all too quickly. Hauling the boat ashore we spotted a sign for a bar and went for it. Ann has been having a run of bad luck recently, asking for items on the menu or advertised, that are unavailable. Ordering Cliff a beer (French required) she spotted a sign for mojitos. Since Ann doesn’t drink beer, she thought that might hit the mark but, alors, he hadn’t got the ingredients. However, he suggested She had the ginger and lemongrass tonic instead. It sounded ok so she went for it. Wow was it good! Refreshing and zingy, it was fabulous! And he told her how to make it, so she’s going to try making them herself.

We wearily climbed aboard the bus after a walk out of the gorge and returned to the car. The plan was to return to the gite via the supermarket. As we drove out of Vallon Cliff realised he didn’t have his wallet! We returned to the base, no luck. Drove to the bar, north there either. Returned to base again to leave contact number, just in case and went home, dejected and cancelled the bank card. Fortunately Cliff emptied his wallet of the other cards. Later than planned we strolled in to Balazuc for dinner. Le Fernier this time. Saturday night, late, no reservation, we were lucky to get a table. We were part way through the meal when Ann realised she had a voice message. As well as the Internet being flaky, the mobile coverage is a bit hit and miss too. Anyway, she listened to the message and they had found the wallet!

Had to change our plans slightly for the following day’s cycle ride but pleased to collect a slightly soggy wallet, complete with damp €50 note after it had been washed out of the waterproof canoe tub. A whole new meaning to money laundering! In the end it was a happy ending to a great day. 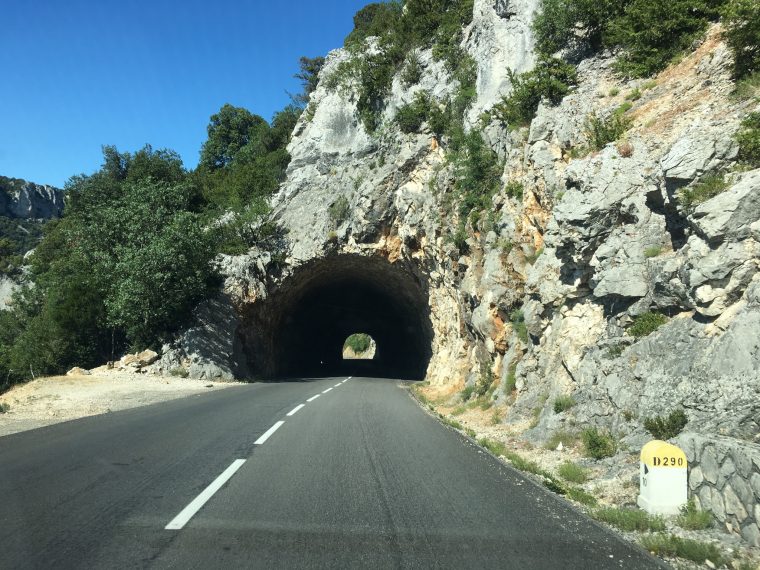 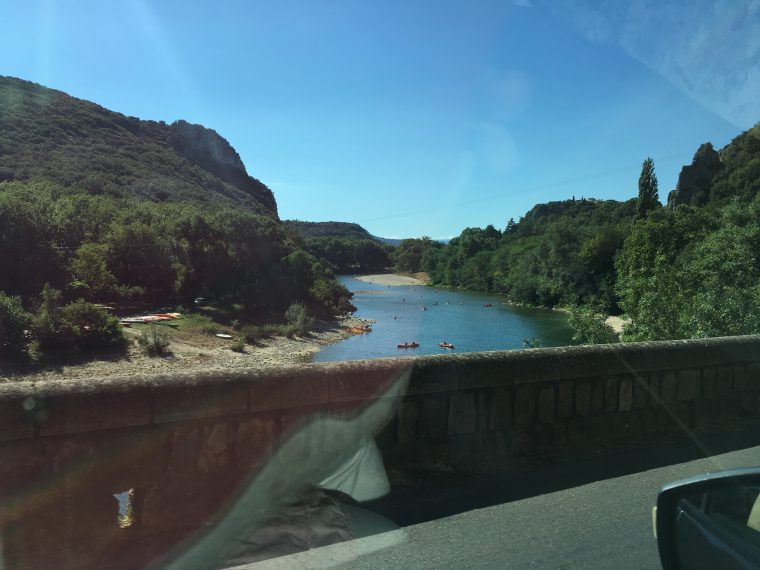