A Day in Chianti

Part of the reason we chose to take a longer stopover in Florence is because of its location in Tuscany. It was one of Cliffs dreams to tour Tuscany and visit a vineyard. Thanks to our hotel, we found and booked what looked like the perfect tour.

Bright and early on Monday morning our guide Sabatino arrived in the piazza with his fully air-conditioned 7 seater bus. We had opted for a private tour, so it was just the three of us and Ann sat up front.

Sabatino was very knowledgeable and spoke excellent English. It transpired he had spent some time in London studying and working part time for an architectural firm. Although he is a trained commercial air systems technician, the construction industry in Italy is slow at the moment so he had taken on the guiding again, as he had previously taken his guiding certificate. It was interesting to learn that other countries have their problems too.

Our first stop was Greve In Chianti, birth place of Giovanni da Verrazzano, apparently the first European to set foot on the East coast of North America. The main piazza was lovely, with a statue of Giovanni and two colonnades of little shops and cafes. The butchery has been owned by the same family for nine generations. The delivery vehicle out front may not have been their first but it was certainly venerable! We did a little shopping, had a coffee and then Sabatino came and picked us up again.

Driving through the beautiful rolling hills of Chianti, Sabatino explained to us about Chianti wines and in particular Chianti Classico. There are very strict rules regarding the production. It must contain at least 80% Sangiovese grape. The vines are not allowed to be watered and the wine must then be barrel aged for at least one year. Chianti Classico Riserva must be aged for a minimum of  2 years. An inspector comes to the vineyard before the harvest and assesses how much wine will be produced and orders the number of labels to be sent accordingly. It’s all very strict. You can identify a Chianti Classico by the black rooster in the red circle logo on the neck of the bottle.

The vineyards are also allowed to use other grape varieties in a less controlled manner to produce a wine called Super Tuscan. The small vineyard we visited first was a very small producer.

Producing their wine organically, they have one section of very old vine, from which they produce grapes for their ‘super Tuscan’ wine. We were pointed out the roses that grew at the end of the rows of vines. They use them not to look pretty (although they do!) but as early indicators of potential problems. The roses get mildews and infestations about a month before the vines, which gives them time to protect or treat the vines appropriately before they are affected.

The tasting took place in the charming old farmhouse. We were privileged to try a range of wines, including the Super Tuscan , which we liked very much. They also grow white grapes, which they leave on the vine in the sun until they are rather like sultanas and then they make a sweet dessert wine. Not to our taste but pleasant.

Bidding a sad adieu to Riceccoli Vineyard, we were driven to a medieval walled town, San Gimignano. A UNESCO world heritage site, although it is heaving with tourists (including us!), is an amazing place. (Note to self; return out of season to enjoy the finer details!)

It is known as the Town of Fine Towers. Sabatino tells us this is because there was a rivalry between two families, which resulted in the families building ever taller, finer towers. Towards the end of the mediaeval period the council finally put an end to this absurd competition by issuing an edict that no tower should be higher than the Palazzo Comunale. But it left a legacy of many fine examples of mediaeval tower design. In the mid 1300’s it was struck by plague that wiped out over 50% of the population and brought to an end its period of prosperity that it never really regained. As a result the town remained preserved. We bought a small linen table runner as a memento and had a beverage in the piazza before once again mounting our chariot!

Our final stop was a wine tasting and ‘light’ lunch at another small family run vineyard. We were shown to our own private dining room, complete with antique long case clock and were offered a number of wines as we ate our lunch. Lovely fresh bruschetta, followed by a tasty fresh pasta dish. Dessert turned out to be one of their white wines with almond biscotti. The wine was almost fortified and weighed in at a hefty 16%! Ann loved it, Cliff didn’t, so guess who ate all the biscotti?!!

We returned to Florence having enjoyed some fine wines, bought a good number of bottles and with many photographic reminders of an excellent day in Chianti.

So, did Cliff get the experience he had dreamt of? Oh yes. And we have several excellent bottles of wine to rememeber it by!!! 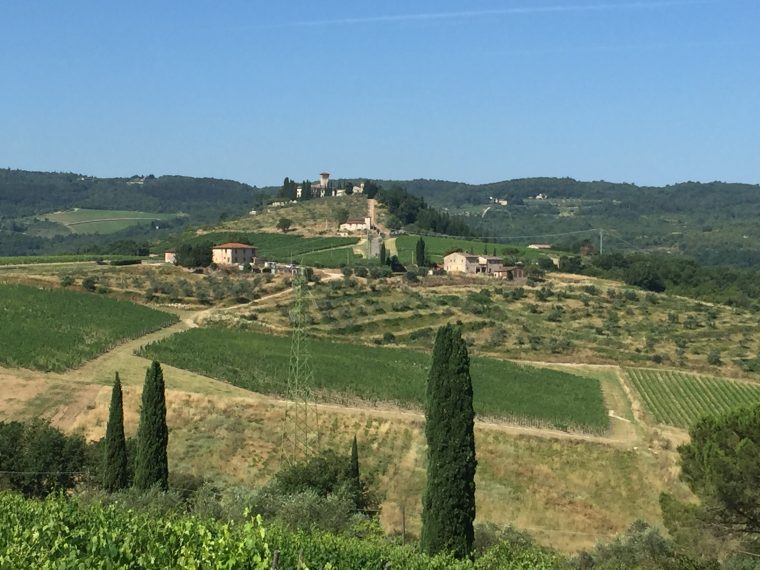 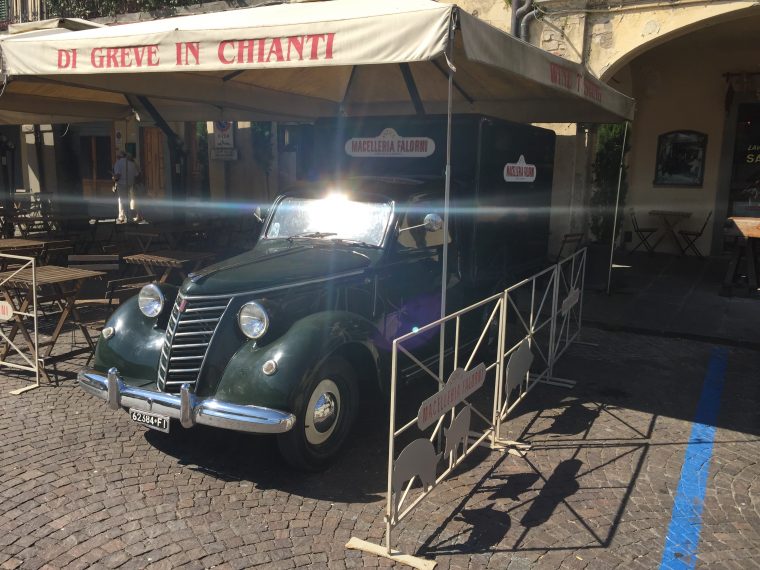 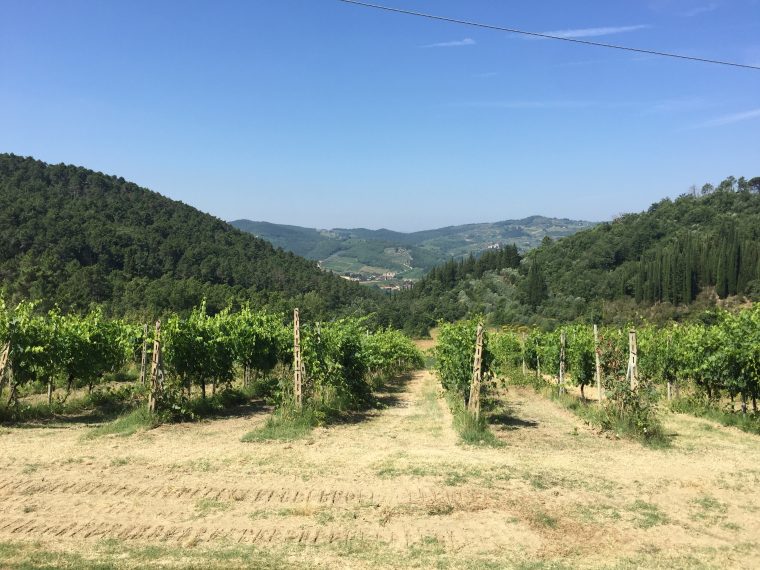 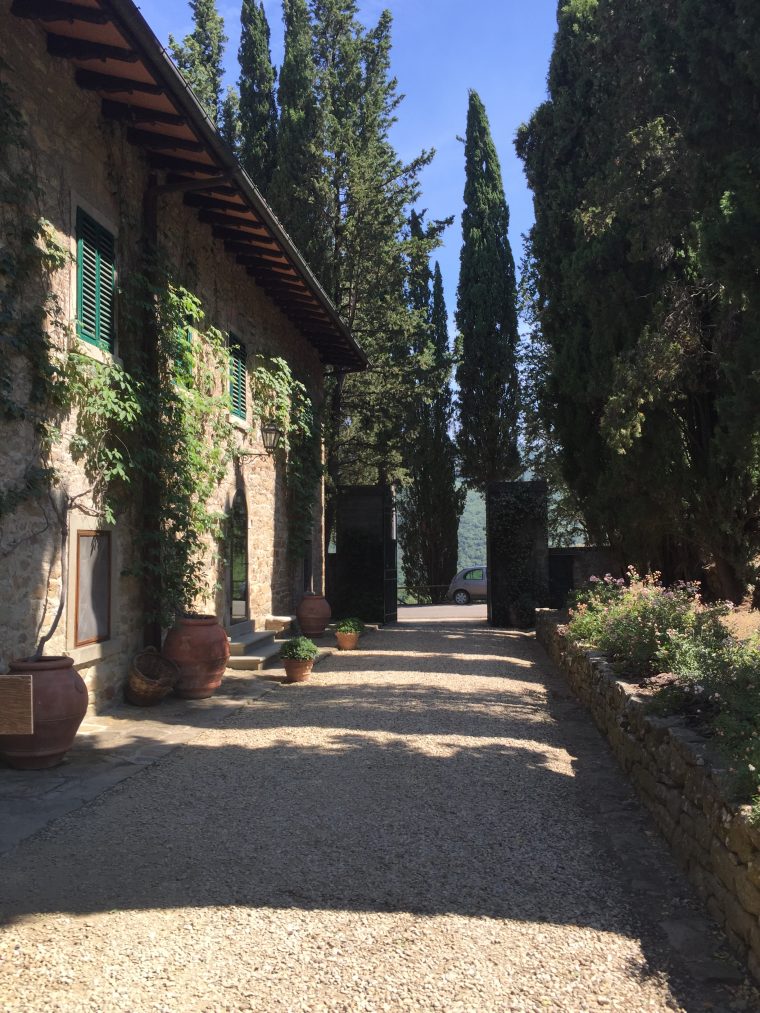 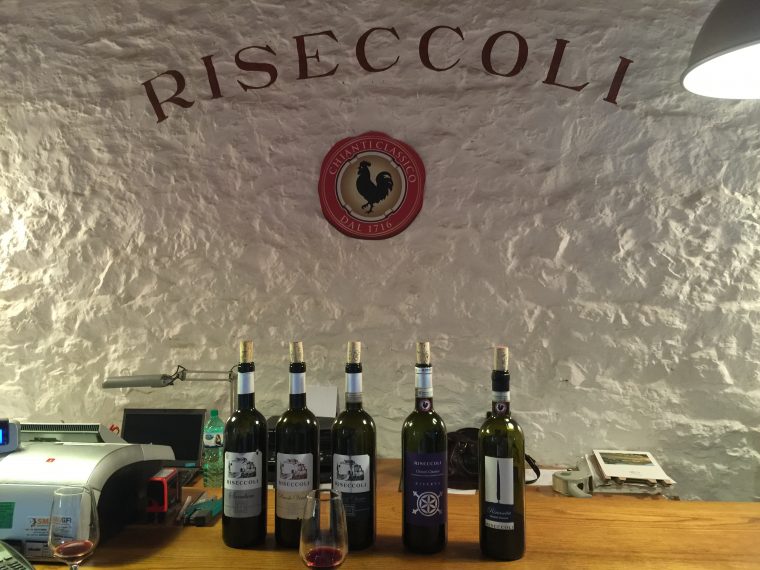 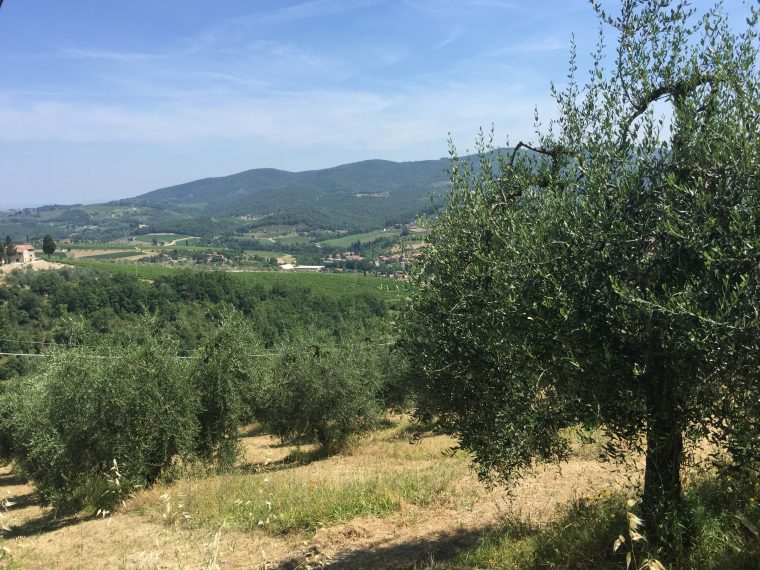 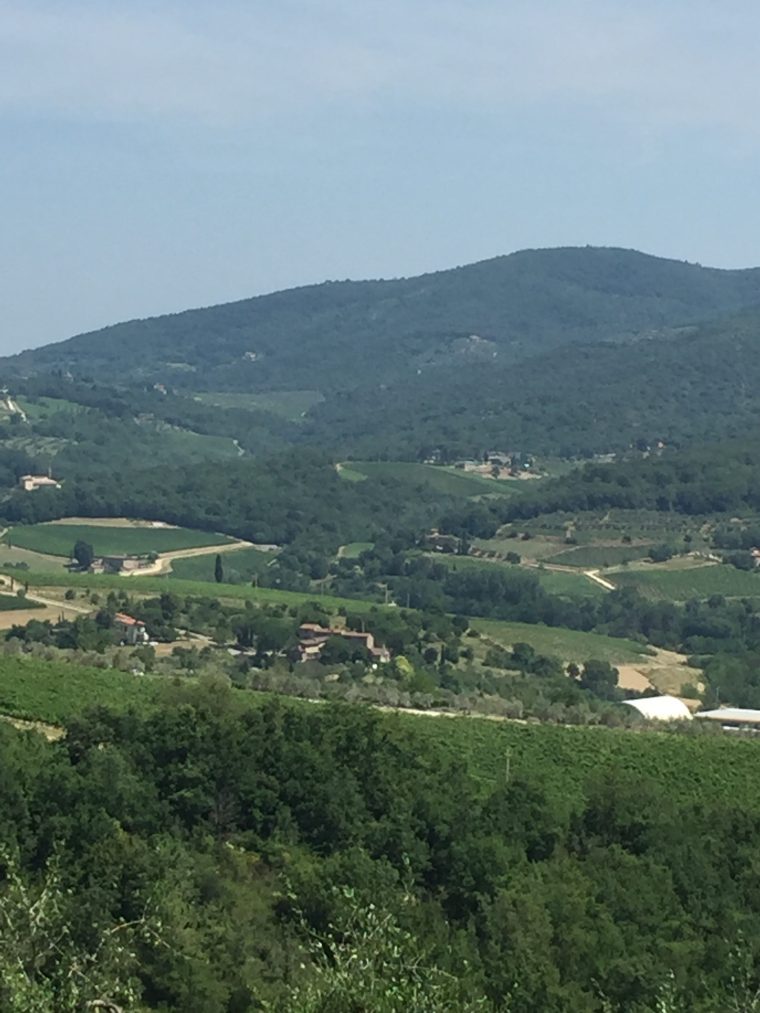 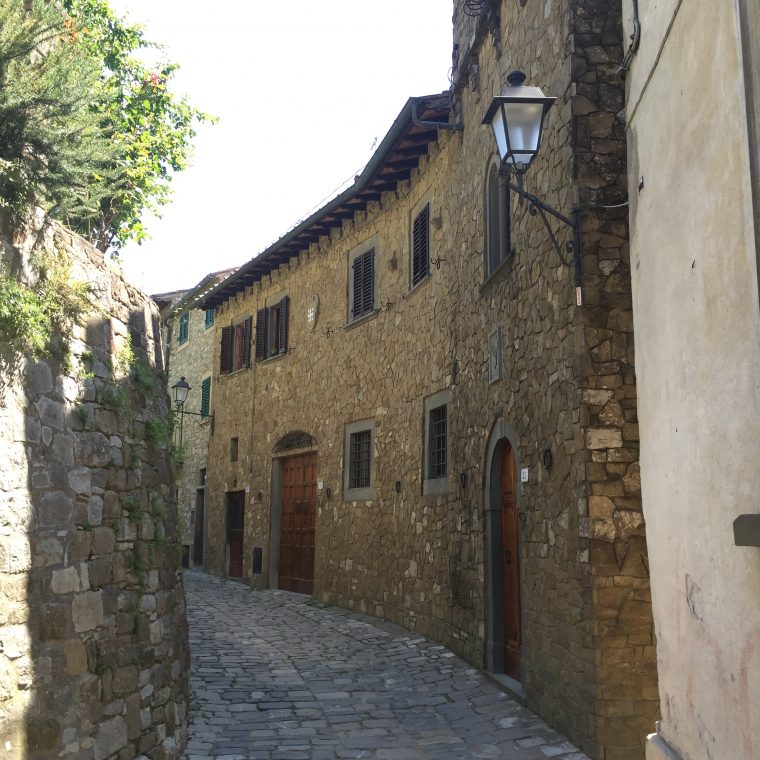 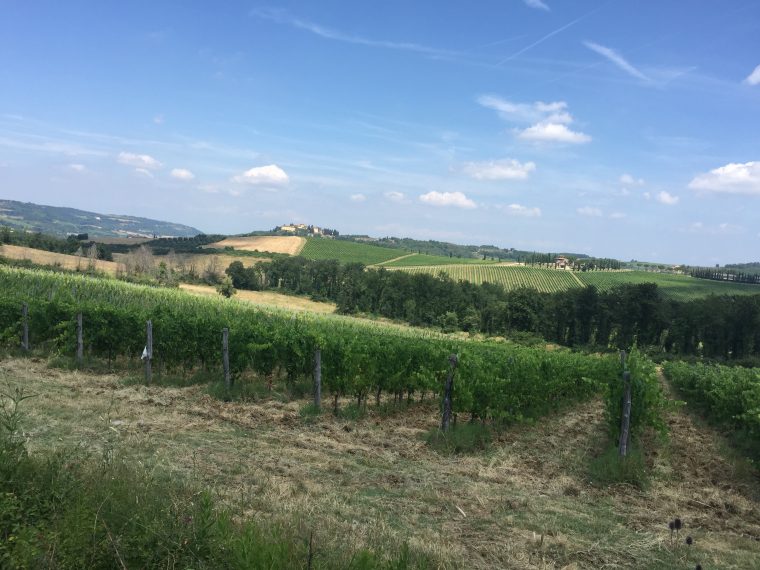 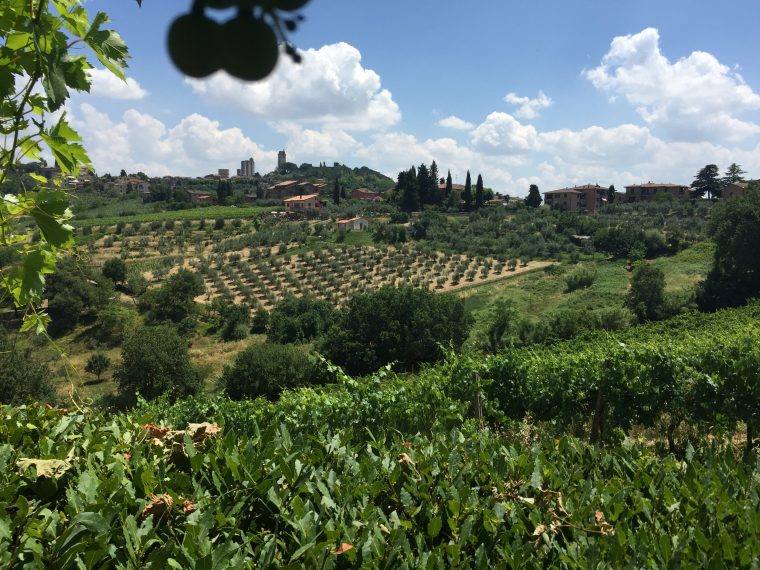 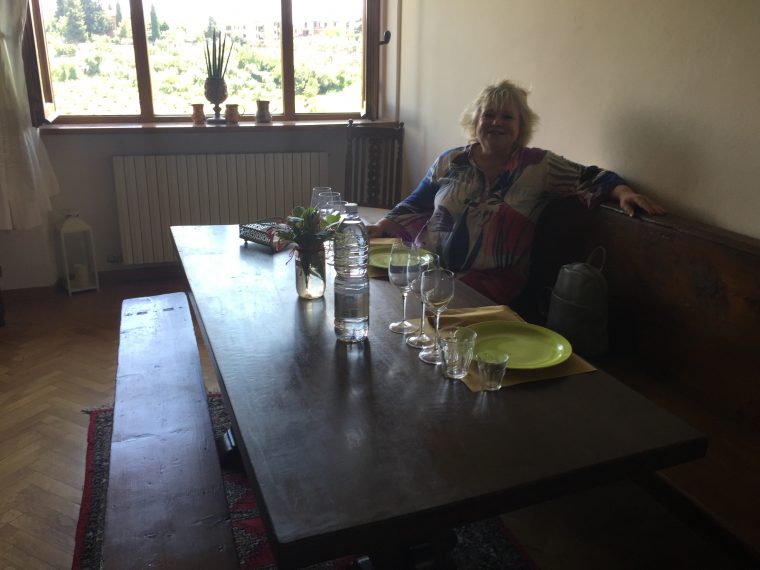