We arrived in Menton following an easy drive on motorways past borders with no passport controls. We arrived at the Hotel Napoleon, a recommendation from Cliffs sister who has stayed here a few times. It’s an interesting hotel. It’s dedicated to Jean Cocteau and has many prints of his work on the walls. It also has tributes to his work in the room. It has made Ann research him and has found him to be a rich and vibrant character, an author, poet, painter and theatre impresario. There is a museum with a fine collection of his work in Menton, which he called the Pearl of France.

As normal, we asked the staff for a restaurant recommendation. The barman gave us a tip about a couple within easy walking distance. Off we went and the first we came to was Leone, run by an Italian Chef Patron. It looked inviting and they could seat us so we stayed. We are so glad we did!

Open only 3 weeks in its current location but opened 5 months previously in another place that was too small. We learnt all this from our delightful, hardworking Romanian waitress. Ann always tries to use her French on these occasions but it turned out the waitress preferred to speak in English. We tried! The other waitress was Italian but spoke no French or English, which proved tricky when asking for a little bit of butter for our bread! But, beurre / burro is it really so hard?! I think she was a little put off by our Englishness. She was good at making coffee though!!

We had the most delightful meal. All beautifully prepared and presented but not a whiff of nouvelle cuisine. Portion sizes perfect for hungry travellers. We noticed that locals were eating at the restaurant, including some from neighbouring Monaco. Always a good sign. Complete with a nice bottle of rose, desserts and coffee, we were very happy to pay the bill. In Menton, the prices are much more reasonable than Florence! A stroll home along the beach promenade and so to bed!

Another of Cliffs ambitions was to drive the Route de Corniche. It’s quite confusing as there are three of them. The lower Route de Corniche runs along the coast and is a bit of a slow drag. The middle (Moyen) Route de Corniche wends its way just above the lower road. But the classic one, as driven by Grace Kelly et la, is the Grande Route de Corniche. However, the route is strangely, poorly marked and not clearly signposted or way marked. So Cliff has defined it himself. At the point where the three conjoin we were met with road closures. It wasn’t easy but we found our way to the right road. The views over Monaco are spectacular and the scenery along the road stunning.

On the recommendation of Cliffs sister again, we stopped at a little village called Eze, another medieval village. The car park was heaving, so we followed the signs for the free ‘navette’, some 2.5 km up out of the village. This proved a smart move! Operated by the local council, sponsored by local businesses, they operate a small minibus service for 5€ per car, which entitles you to free transport into the village, one free entry to the Jardins Exotiques (Exotic Gardens) and discounts of varying amounts in the businesses that are part of the scheme. Smart idea and , as you know, we like to support local business.

Our purpose for visiting Eze was to visit the gardens, so that was very good value for us! The gardens are amazing. They have zoned areas, peaceful, Mediterranean blah, blah with lots of beautiful and extraordinary plants. The majority are cactii, succulents, a….. and alpines, all plants that love the heat and the dryness. Extraordinary. And yes, exotic!
As always, beer and lunch was a pre-requisite. Although we had again received a recommendation, we inadvertently sat on the wrong terrace! However, it was serendipitous, we had an excellent platter of cheese and cold meats with beautiful bread and fresh olives, which were served with their own basil olive oil. Yummy, yum yum! We then bought some of the olive oil for ourselves and as a gift for Janet. It was expensive but worth it.

Back then to the Route de Corniche and onwards to Cavaillon, home of Cliffs sister and journey’s end for this leg of our journey, another of Cliffs ambitions crossed off the list! 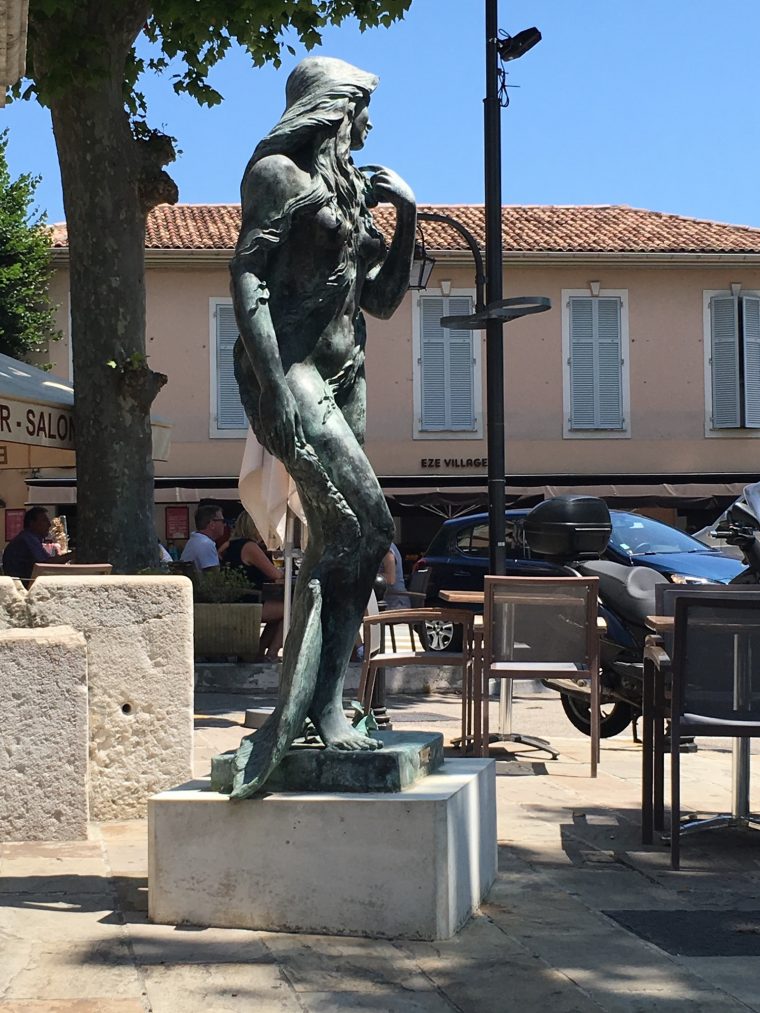 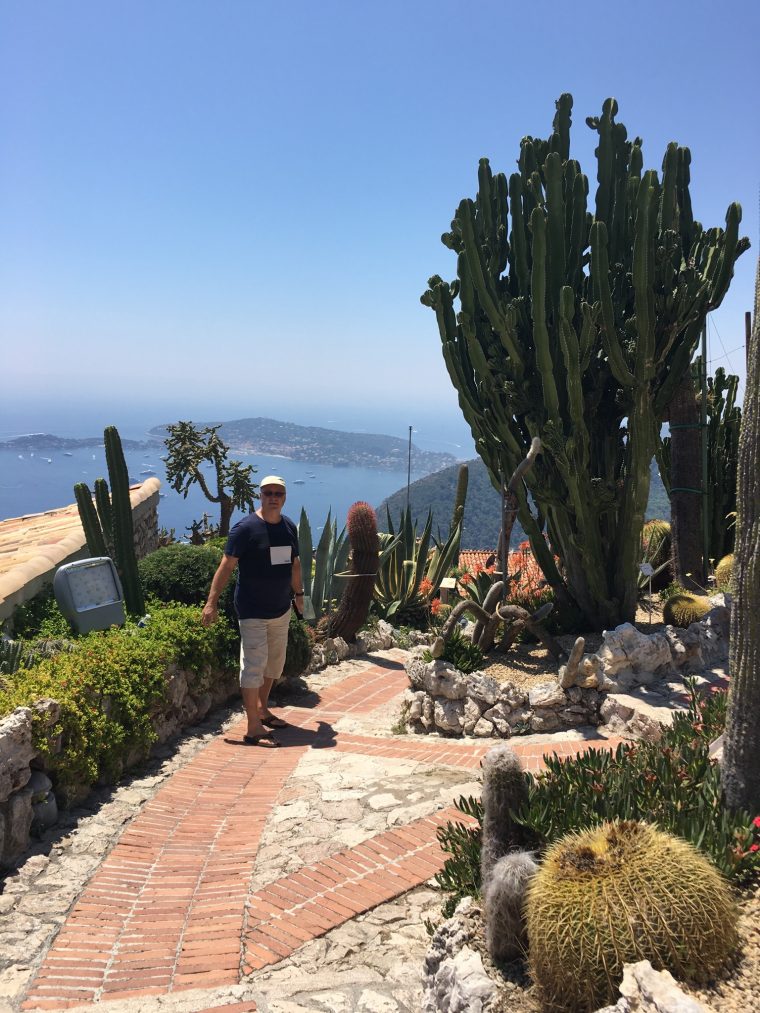 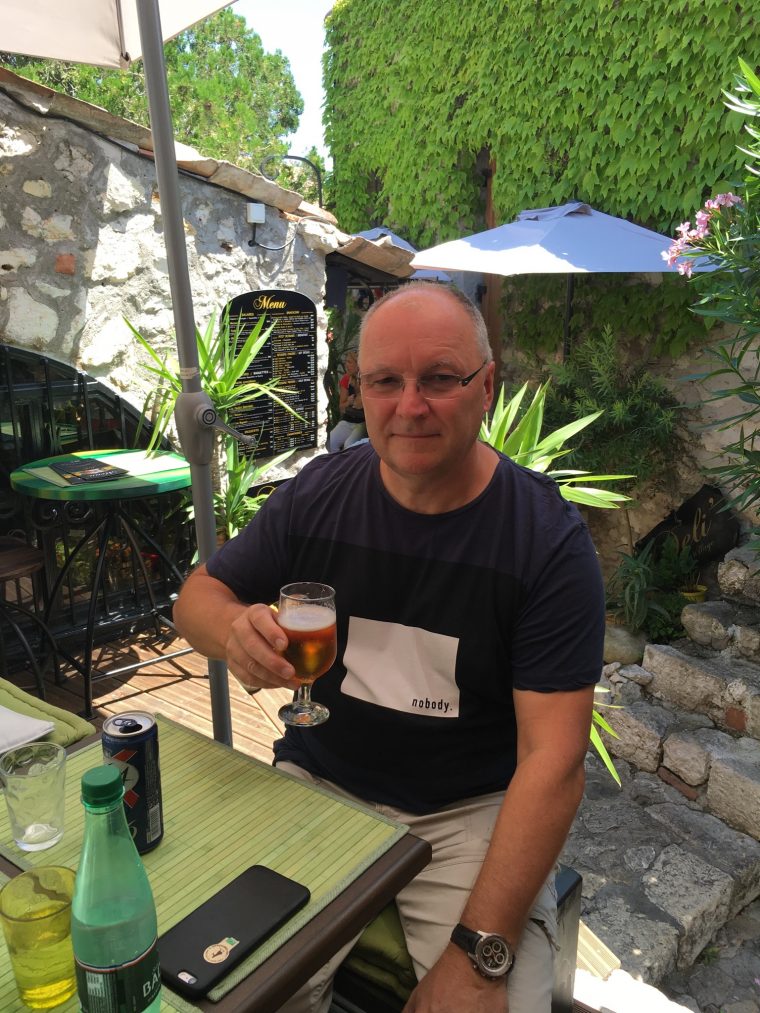 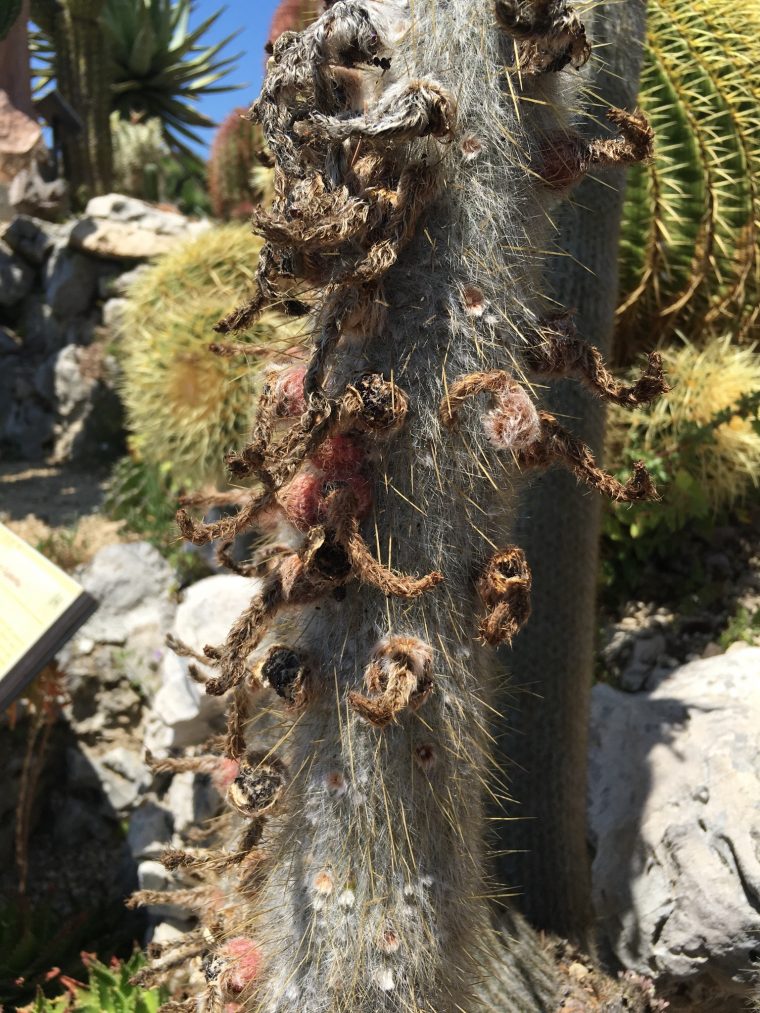 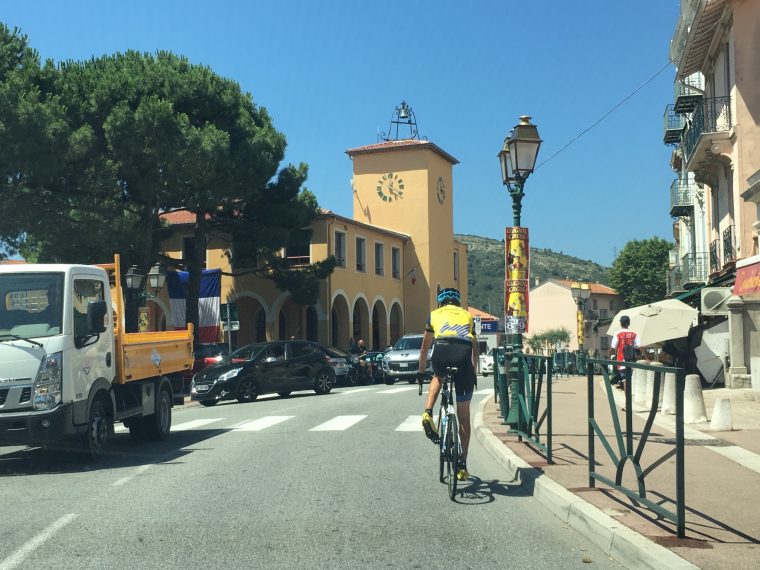 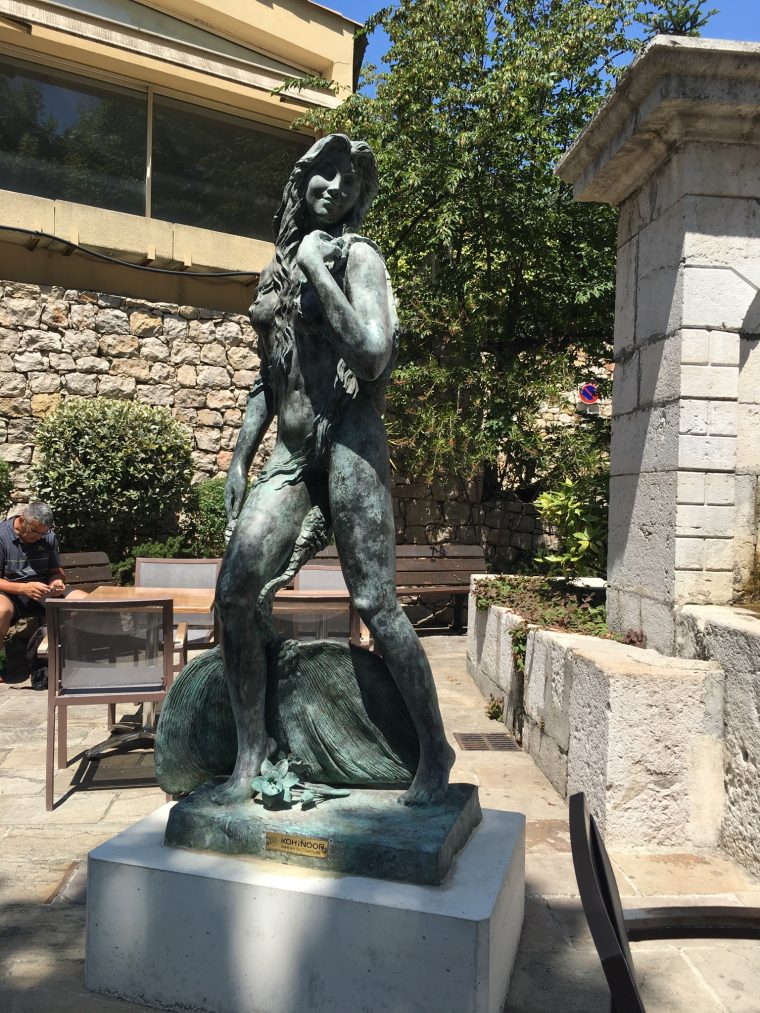